Our story is really His story.  Written from the beginning of time.

Zane and I met in January, 2001.  I was attending Ashland Christian Fellowship in Ashland, Oregon. He had just returned back from a semester abroad studying in Ghana, West Africa--an exchange program with Southern Oregon University.  We had both been told by mutual friends how much we had in common with one another.  I too had lived in Africa.  In 1999 I spent a year in Zambia as a nanny for a missionary medical doctor.  We also loved sports {Zane wrestled in college and I was a competitive long distance runner}.  The most important thing we had in common was the fact that we both loved the Lord and desired to live our lives fully for Him.

To make a long story short, Zane and I met, fell in love, and married on August 25th of that year {yes, we only knew each other for 7 months}.  Two months after our wedding, we led a missions team to Honduras.  It was during this trip that the Lord burdened Zane's heart for missions {I had been given this burden when I was 15}.  It would be three years before the Lord would fulfill this burden in our hearts.

*On a side note, our first born daughter Eryn was born exactly 2 weeks before our one year anniversary*

During those three years, Zane and I worked and ministered at a Christian Retreat/Dude Ranch in the mountains of Southern Oregon. We filled various roles from field manager, youth leaders, cooks and cleaners. And although this time in our marriage proved to trying, for many reasons, looking back we can see how the Lord was preparing us for full time ministry overseas.

Through a series of events, the Lord began to reveal that it was time to prepare for the foreign mission field.  At first, it seemed the Lord may have been leading Zane to attend a two year bible college. We thought it would be wise to first visit the college before making any final decisions.  So, we packed up the mini-van and took a two day road trip down to Southern California.  It was so neat to see how the Lord had already orchestrated the meeting that we had with the college administrator.  She asked us where the Lord was leading us and we went on to explain our burden for Africa. She then proceeded to flip around her computer screen and show us the website of a Calvary Chapel affiliated missions organization whose focus was on East Africa--with their  headquarters located just around the corner. After seeking the Lord, we set up a meeting with Far Reaching Ministries. And the rest in HIStory.

We have been serving in Uganda with Far Reaching Ministries since 2004.  We spent our first six years in the Central region of Uganda.  Zane ministered as a bible college instructor, co-church planter, evangelist and assistant/associate pastor. In 2006, just after our son, Ezekiel turned one, the Lord began "placing the lonely" into our family. You can read more about our children's story on the "No Longer Orphans" page.  My ministry has always been in caring for the home and the children.

The reason we tell our story is because of Jesus and His glory alone.  We never want it to be about us.  May our lives be an "open book" that tells a story of hope, of faith, of transformation and of an abundant life. 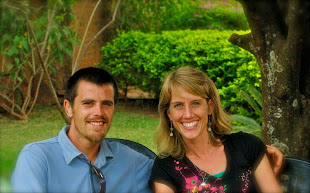